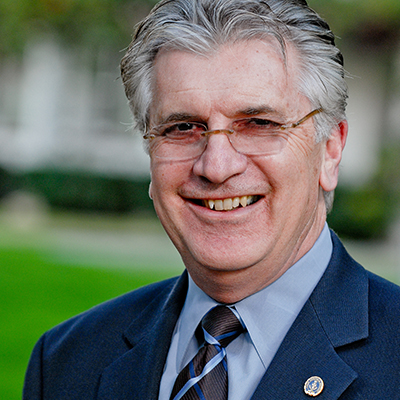 Dean Emeritus and Professor Emeritus of Theology and Ethics

Howard J. Loewen served as dean of the School of Theology from 2001 to 2014, at which point he retired from his administrative position and resumed his role as a senior member of the Center for Advanced Theological Studies (CATS) faculty. He is now professor emeritus of theology and ethics at Fuller.

Loewen was born in Vancouver, British Columbia, and lived in the Fraser Valley area through high school. He completed his BA in Philosophy at the University of Winnipeg (1968), his BTh in Theology at the Mennonite Brethren Bible College and College of Arts [now the Canadian Mennonite University] (1968), and his MDiv (1971) and PhD (1976) at Fuller Theological Seminary. He has also been a visiting scholar at the Graduate Theological Union, Berkeley (1984 and 1988), the University of Edinburgh (1990), and Princeton Theological Seminary (2009).

Loewen has taught and published in related fields of theology over a period of four decades in Canada and the United States. During that time he served as academic dean of the Mennonite Brethren Biblical Seminary (1992–1995) and academic vice president and provost of Fresno Pacific University (1995–2001). He has also been involved in pastoral, denominational, and global ministries, as well as in national and international ecumenical dialogues throughout his career.

In 2001 Loewen returned to Pasadena when he was appointed dean and professor of theology and ethics at Fuller’s School of Theology. Since his retirement in 2014 from the deanship he continues to be involved in the Center for Advanced Theological Studies (CATS) in the School of Theology as a teacher and adviser of doctoral students. He specializes in the theology of Karl Barth.

Loewen is a confirmed member of the Church of Our Saviour in San Gabriel, California, the oldest Episcopal Church in Los Angeles, where he also serves as a licensed Eucharistic Minister and Liturgical Coordinator. He is married to Dr. Irene Loewen, a clinical psychologist. They have two married daughters and three grandchildren.