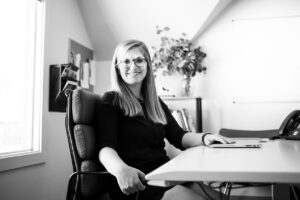 Michaela O’Donnell Long sits in an Eames Highback Chair (the same one Max De Pree used as CEO of Herman Miller), a symbolic gift from the Andringas to commemorate the new position.

Earlier this year, former De Pree Executive Director Mark D. Roberts was installed as the inaugural chair, honoring him for his years of faithful and fruitful service. Now, Michaela O’Donnell, current executive director of the De Pree Center and assistant professor of marketplace leadership, inhabits the chair. Roberts is now a senior strategist for De Pree.

“This gift marks a monumental moment for the De Pree Center,” said O’Donnell. “It will ensure that the center lives on and that the legacy of Max De Pree is cemented at Fuller. In addition, it will guarantee that people in the marketplace will be core to the work of the institution for years to come.”

Mary Andringa, who also sits on Fuller’s Board of Trustees, called it “an honor and a privilege” to make the gift for the De Pree Center. “We met Max early on in our careers and looked to him as a mentor,” she said. “It was because of Max that I have the opportunity to serve on the Fuller board. We learned a lot from Max about stewardship and the integration of faith and work. We know that the resources provided by the De Pree Center can really support business leaders who are striving to integrate their own faith and work.”

In a symbolic gesture to commemorate the new chair position, the Andringas also presented the De Pree Center with an Eames Highback Chair from Herman Miller (now MillerKnoll), which was named after Max De Pree’s grandfather and where De Pree served as chief executive officer for many years.

O’Donnell expressed “tremendous gratitude” for the Andringas’ vision and generosity. “Like Max De Pree himself, Mary and Dale are exemplars in living out the faith, work, and whole-life integration we seek to promote at the De Pree Center,” she added. “It feels like both a blessing and also really right that their names be associated with Max’s in this particular way for many years to come. Not only that, but with this gift, the Andringas are affirming that at Fuller Seminary, we believe that the work of leaders across industries—from business, to manufacturing, to healthcare—matters deeply to God and therefore deeply to us.”

The De Pree Center was founded in 1996 by Samuel T. Reeves in honor of his good friend and fellow Fuller Seminary board member Max De Pree. Reeves established the center in recognition of De Pree’s profound influence on leaders around the world through his leadership at Herman Miller, as well as through his best-selling writings, nonprofit work, and mentoring.

Learn more about the De Pree Center and its offerings.