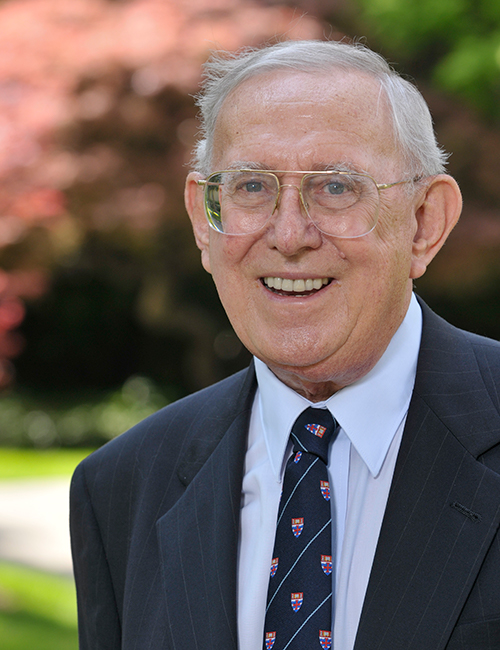 The Fuller community mourns the passing of Colin Brown, professor emeritus of systematic theology at Fuller Seminary, who passed away on the morning of May 4, 2019. He was at home, surrounded by his children and loved ones, when he died. We are thankful for the life of Dr. Brown, and his significant scholarship, which he pursued with curiosity and vigor, as well as his influence as a professor known for his generosity.

“Colin Brown was a distinguished scholar and teacher whose contributions shaped Fuller for over three decades,” said Richard J. Mouw, president emeritus of Fuller. “Dr. Brown dialogued passionately with the voices of history to understand the nuances of the Western church’s Christology, and he strove unceasingly to enhance the intellectual life of the seminary and the church at large.”

Brown joined the faculty of the seminary in 1978 after several years as an instructor at other American, British, and German institutions. Primarily teaching courses on systematic theology, Brown was especially interested in Christology and also led advanced seminars on Jesus in contemporary Western thought, the politics of Jesus, miracles, and theological method. But Brown’s influence went far beyond the territory of theological thought.

“Colin and Olive were mentors for both Olga and myself,” said Juan F. Martínez, professor of Hispanic studies and pastoral leadership. “Colin opened doors for me at Fuller, specifically by inviting me to guest lecture on Latino and Latin American theological trends in one of his theology courses every year. Even though we had very different understandings of the theological task, he encouraged his students to be attentive to the contributions of those who decentered the European/American theological narrative.”

Along with scores of articles, Brown is known for his books Karl Barth and the Christian Message (1967), Philosophy and the Christian Faith: A Historical Sketch from the Middle Ages to the Present Day (1969), and Christianity and Western Thought: A History of Philosophers, Ideas, and Movements, Vol. 1: From the Ancient World to the Age of Enlightenment (1990). His book Jesus in European Protestant Thought (1985) was a finalist for the Philip Scaff Prize of the American Society of Church History, awarded to the best published work on church history originating in North America, and Miracles and the Critical Mind (1984) received numerous honors, including the Evangelical Christian Publishers’ Association Gold Medallion Award in the Doctrine and Theology category, first place on the Critics’ Commended List of Books in the Los Angeles Times, and a Logos Book Award. He also edited the four-volume New International Dictionary of New Testament Theology (1986).

“He was passionate about his own research and methodology, but always generous to those of us who came at the subject matter with a different slant,” said Robert K. Johnston, professor of theology and culture. “Here is Fuller at our best.”

Brown helped build Fuller’s academic legacy through his oversight of the ThM and PhD programs, and as associate dean for the Center for Advanced Theological Studies in Fuller’s School of Theology, serving in that role from 1988 to 1997. He received the seminary’s C. Davis Weyerhaeuser Award for excellence in teaching in 1988.

“I sat at the feet of Colin in the beginning of the 70s at Tyndale Hall/Trinity College in Bristol, England,” said Professor of New Testament Seyoon Kim. “What I learned from him in his Philosophy of Religion class during those days has helped me integrate faith with critical thinking all through these years of my life.”

Upon hearing of his passing, Professor of Systematic Theology Veli-Matti Kärkkäinen reflected, “When I came to Fuller 19 years ago, he was like a father to me—and he also treated me as an equal colleague. What a great spirit!”

Dedicated to the flourishing of Christian minds in the academy more broadly as well, Brown ministered to students as a regular speaker at InterVarsity Christian Fellowship (now Universities and Colleges Christian Fellowship) meetings and conferences in Great Britain in the 1960s and 1970s. He was ordained as a priest in the Church of England in 1959, serving as a priest in the Episcopal Church after becoming a US citizen in 1986. From 1988 to 2007 he ministered as an assisting priest at St. Mark’s Episcopal Church of Altadena, California.

Brown’s last days were described as “remarkably peaceful,” attended by many who loved him. He succumbed in the end not to disease but, at 87, a natural “winding down”—his body, it was said, just “wore out,” and “now he has risen in glory to the eternal love of God.” We are honored to have been the beneficiaries of Dr. Brown’s scholarship and are grateful for the influence he had on the life of Fuller, our scholars and students, and the world.

+ A memorial service for Dr. Brown will be held on Monday, May 13 at 6:30pm at Saint Mark’s Episcopal Church in Altadena, CA.