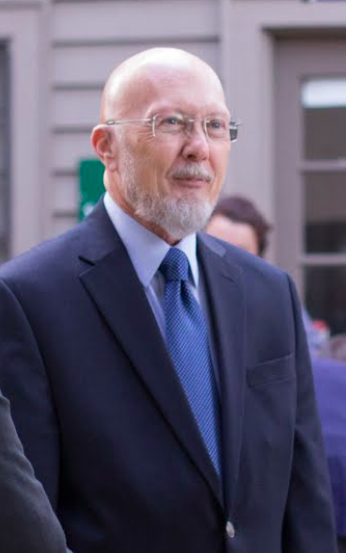 member, who passed away Tuesday, September 11.

A beloved and truly essential part of the seminary, David first joined Fuller in 1977. He spent his first three years teaching Beginning through Advanced Greek full time, and then served for five years as assistant to Fuller’s first provost. In 1985 he was appointed registrar, the position he held ever since—for 33 years.

Responsible for Fuller’s course catalog and Commencement ceremonies beginning in 1981, David oversaw 38 Commencements. With his impeccable attention to detail, each was run like a well-oiled machine. He was deeply committed to Fuller’s students, a commitment that was recognized when he received the All-Seminary Council’s Service Award in both 2000 and 2011. Over the years he continued to teach Greek in the evenings in addition to his full-time registrar role, and even found time to write two Greek textbooks.

“David’s incredible gifts equipped him to manage one of the most technical, demanding, and important jobs in any educational institution as registrar,” said President Mark Labberton. “His care, his intelligence, his ability to think very, very carefully, his attention to the precedent-setting implications of things, his ability to negotiate complicated circumstances, and his extraordinary institutional memory were all simply remarkable. He rigorously held us accountable to being our best selves institutionally with an attitude that was reliable, clear, consistent, and faithful. We are extremely grateful for his service and deeply grieve his passing, which is such a great loss to Fuller Seminary.”

Several of David’s colleagues thought it would be fitting to have a scholarship in his name because of how much he loved students; therefore, Fuller is establishing the David Kiefer Scholarship Fund. (Checks can be made to Fuller Theological Seminary and marked for this purpose.)

David leaves behind his new bride, Linda, whom he married just three weeks before his passing. We grieve with Linda, and encourage all to remember her in their prayers. David is also survived by nine brothers and sisters as well as many nieces and nephews. A memorial service will be held at Lake Avenue chapel, September 19, 1:00–2:00, with a reception immediately following in the Skyroom lounge from 2:00–3:00.

Below we share just a few of the many voices expressing all that David meant to them and to the seminary over the years. If you have your own memories you’d like to share, please email editor@fuller.edu.

A video prayer from Johnny Ramírez-Johnson, professor of anthropology:

From Barbara Hunsicker, vocational advisor and coordinator of Presbyterian ministries:

Today I join with the Fuller community in mourning the loss of our registrar and friend, David Kiefer. In my 3+ years as an advisor, I’ve had the privilege of working alongside David. Of course I’ll miss him for the many big ways he served Fuller, but as I reflect on my memories, the quotidian ones come to mind most vividly: walking over to his office countless times with the line “David, I have a student . . .” and him spinning around his office chair waiting to hear my latest dilemma, his wine goblet filled with Diet Pepsi, how he’d drop by our office to shoot the breeze (often at 4:59 pm!), his forest green suit (a sharp one, though I once called him a leprechaun in it), the time he convinced me that he was holding a cockroach in his closed fist (while sporting his classic Cheshire cat grin) . . . the list goes on. As I write this, I hold my two-week-old daughter in my arms, and I wish so badly that I could have introduced her to my friend David, who I’m certain would have a twinkle in his eye upon meeting her.

David Kiefer was a part of Fuller Theological Seminary for 40 years. No one currently here has worked or studied in a Fuller that was not marked by his calm, clear, and constant presence. In ways far beyond his remarkable longevity, David was a rock, holding firm the academic standards and policies of the seminary, problem solving countless issues, and leading the team in the registrar’s office to faithful service to the student body. He was also a man of endless resourcefulness, deep pragmatism, and surprising humor. I have lost track of the number of times he told me something was simply impossible and then somehow found a way to accomplish it. No matter the task—from late grade submissions to the commencement pageantry—he never lost sight of his goals. His incredible competence was enlivened by his dry wit, flashing out at the most unexpected—and needed—times. I appreciated his wise counsel, depended on his steady reliability, and will miss him more than words can convey.

I met David after starting as a Fuller professor in 1990. He was a very competent, disciplined, and efficient professional who was quick to offer a warm smile. Soon after I began teaching, some of my grading decisions were questioned. It was David who provided tangible support that helped resolve the conflicts, a kindness I will never forget. When I joined the Academic Integrity Committee around 2001, David was an invaluable resource, and our AIC work together continued until just days before his wedding. I valued his expertise, but I appreciated his company even more. Visiting with David would brighten my day, as would a quick chat before his Greek class, held for years next door to my office. Like many, I remember his sharp suits and the casual summer attire, but I especially loved his leather jacket and pilot sunglasses when he rode his motorcycle! I will greatly miss my friend as a man who loved God and others deeply, who served with distinction and humility, and who smiled most brightly when he spoke of Linda, his bride-to-be. As I grieve especially for her, I pray the hope of heaven sustains all who await our great reunion.

I cannot believe that our dear friend and colleague, David Kiefer, will no longer be our PILLAR of a registrar at Fuller, not to mention that Fuller students will not get a chance to study Greek with him (maybe he’s holding study sessions with some folks in heaven!)  He always worked so hard to find me the right classroom for my spiritual formation and integration courses, especially for my Latino Center students. And when Rob and I arrived in Pasadena, he gave me some potholders crocheted by his first wife. I still have one some 25 years later.  I will always remember and be grateful for his precision and his fairness to students and faculty…and his kindness to me.

Prof. Kiefer was a quiet man. I remember noticing he was very reserved and private at first. However, as our Greek class journeyed with him, we saw his subtle dry humor come out. He had us share prayer requests and pray for one another in every class. He wrote his own textbook which we used. It employed Noam Chomsky’s theory of language learning in which we picked up most things by exposure and osmosis rather than having to memorize declensions, etc. He didn’t assign us busy work—our final exams were our only grades. I was skeptical of his process at first, but by the end of the first quarter I was translating sentences. He proved his method by the method itself. That was how Dr. Kiefer was. He was never flashy or showy. He was a modest, simple man who knew his stuff. The proof was in the pudding, and he was the real deal. Professor Kiefer was kind, generous, patient, and professional. He created space in our class for everyone. Even though in the last quarter I was the only female, I never felt less-than and was always respected. My input was valued as much as My fellow classmates, and I could tell Dr. Kiefer respected me. He and I connected over languages. Thankfully our paths crossed before I left Fuller. I said thank you and I don’t remember what else. Little did I know that would be the last time I’d see him.

From Robert K. Johnston, professor of theology and culture :

I miss David Kiefer. The quintessential registrar—superb with details, organized, thorough, fair-minded to a fault, given to following the rules and helping others do the same, someone whose follow-through was 100%, David could be counted on to help keep Fuller Seminary honest and functioning smoothly. When I came to Fuller as provost twenty-five years ago, David was already an institution because of his thoroughness, diligence, and effectiveness. We all learned quickly that you didn’t mess with David. Whether communicating with a student or talking with his boss, David was principled in his actions. Fairness was his touchstone.

But David was also much more than simply the person commissioned to keep Fuller on the straight and narrow. For all his precision with regards to the rules and his careful attention to detail, David also cared deeply about faculty, staff and students. In brief, he was a “softy.” Fuller was in an important sense his family. You understood this as you listened to David talk about his students in the Greek classes he taught. He worked overtime to help his students succeed. Or again, when a student was truly in crisis, I could always count on David to find a way to flex with the rules. Even if a teacher (me) felt he needed a special room in order to teach a particular class, David would always work even on weekends to make it happen. Whether it was for a teacher, faculty or staff person who needed help, David found the time and had the skill to help effect a solution.

David was loyal to a fault. He loved his staff and respected their gifts and skills. Never once, in twenty five years, have I experienced anything other than a unified team in the registrar’s office. Never flashy, David led by example. But lead he did. His values permeated his office. David’s loyalty also extended out beyond his work team. He felt called to serve the whole Fuller community and loved doing it. If he could help you, he did. If he didn’t know the answer, he would find it out. If you stopped in to see David, he would stop to talk. Efficiency always merged with friendship. A registrar with a heart who cared deeply for his community, David epitomized someone who loved God with all his heart and with all his soul and with all his mind and with all his strength (Mark 12:30).We have lost a dear friend.