SHE TEACHES: RESISTING THE DANGER OF A SINGLE NARRATIVE 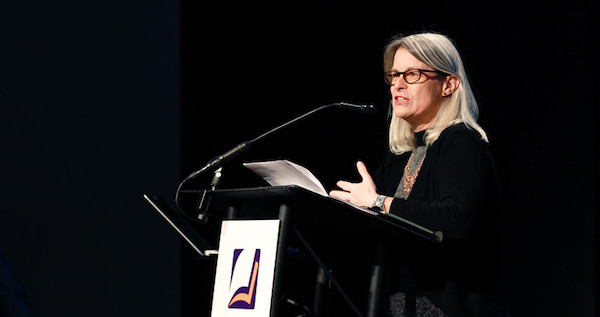 Recently,1 a prominent church leader and author picked up a recurrent theme in hierarchical complementarianism, the (in)appropriateness of women in ministry, but this time he took the argument a step further: emphasizing that women should not be pastors, he therefore insisted that women should also not be seminary professors.2

I understand how he bases this conclusion in his worldview deeply shaped by 1 Timothy 2:9–15, and my first impulse was to shake my head and move on. However, as I considered comments by my colleagues, and more important, the responses to those comments by hurting, confused, and/or angry students, faculty, and members of the public, I felt a growing conviction that this was an Esther moment for me; that is, as long as I am acting as the first female provost of one of the largest evangelical seminaries in the world, how can I not speak out “at such a time as this”?3

I am quite aware of the danger and divisiveness of basing your biblical worldview on a single Bible passage taken in isolation. I was raised in and still belong to the Christian Church in the Stone-Campbell tradition—a church tradition rooted in admirable goals: “to restore Christian unity through abolishing creeds and returning to the principles of the early churches described in the New Testament.”4

People, however, invariably fail to live out noble goals, and this movement that was designed to restore unity fractionated not only from other Christian traditions, but also within itself. One of the most deeply divisive issues centered on the role, type, and recipients of baptism. As a movement, our shaping narrative on this issue was taken from Acts 2:37–39, and so baptism of believers by immersion for the forgiveness of sins became a nonnegotiable. Never mind that this rigid insistence proved a barrier to the unity of the church that was as potent as were arguments over creeds. Never mind that numerous other passages in the New Testament (e.g., John 5:24, Romans 10:9–13, Luke 7:50, Acts 11:14–17, Ephesians 2:8–9, and even Acts 2:21) clearly speak to salvation and don’t reference baptism. This single narrative has been needlessly divisive, and although I still believe that baptism is an act of obedience to which Christians are called, I (like many others in my tradition) also now believe that the division caused by human judgment on baptism grieves God’s heart.

So, it is with humility and a deep awareness of how easy it is to be blinded by the log in one’s own eye that I make the following observations: The situation in 1 Timothy 2:9–15 was just that—a particular situation. Taking that situation as the blueprint for all others misses numerous passages in the Pauline literature that directly contradict the edict here. As a few examples, Paul refers to Junia (clearly a woman’s name) as prominent among the apostles, as his relative and fellow prisoner, and as someone who was in Christ before he was (Romans 16:7). In three separate epistles, Priscilla is called out alongside her husband Aquila as a coworker (Romans 16:3, 2 Timothy 4:19, 1 Corinthians 16:19). In Romans, Paul not only introduces and commends Phoebe as a deaconess, but calls the church to help her however they can, just as she has helped him.

This latest criticism of women in ministry, however, goes beyond barring women from the pastorate to argue that women should not be involved in the formation of those who will be pastors. This argument is even less credible. Timothy himself was noted to be the “son of a believing Jewish woman and a Greek father” (Acts 16:1), and Paul expressly called out the importance of women in Timothy’s formation, writing, “I’m reminded of your authentic faith, which first lived in your grandmother Lois and your mother Eunice. I’m sure that this faith is also inside you” (2 Timothy 1:5).5 Lydia both benefitted from and passed on Paul’s teaching: she led the conversion of her whole household and then provided a place for Paul and his companions to stay (Acts 16: 11–15). Clearly, there is a place in the New Testament for women to participate in the spiritual formation of pastors and others.

One of the most clearly stated arguments against barring women from Christian activities, however, may be Galatians 3:26–29: “You are all God’s children through faith in Christ Jesus. All of you who were baptized into Christ have clothed yourselves with Christ. There is neither Jew nor Greek; there is neither slave nor free; nor is there male and female, for you are all one in Christ Jesus. Now if you belong to Christ, then indeed you are Abraham’s descendants, heirs according to the promise.” As these words were written nearly two millennia ago, one might hope that we would be past the divisions that they challenged, but as this controversy (and the seemingly daily depiction of countless other acts of discrimination of all sorts) points out, people still invariably fail to live out noble goals.

Not all women—or men!—are called to be pastors or to serve as seminary professors. But some undoubtedly are. As fellow heirs, I don’t think we are intended to be barred from participation in what God has called us to do. And I thank God for the formative work that my colleagues—male and female—do in my life and in the lives of our students.

1 There is a brilliant TEDtalk, The Danger of a Single Story, by Chimamanda Ngozi Adichie that inspired the title of this article. I thank her for this talk, which has been deeply formative for me and countless others.

5 All scripture quotations are taken from the Common English Bible.