“Thoughts and Prayers”: The Power and the Impotence of Words

I am writing from afar with grief over the news 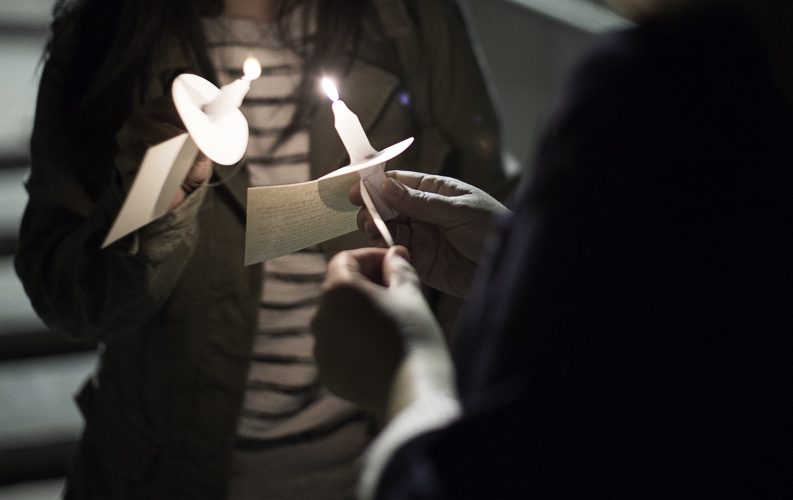 of the last few days as it reaches me at GMT+8 in Seoul, South Korea. I am fortunate to be traveling with, among others, Assistant Provost for the Korean Studies Center Sebastian Kim and spending sacred time with our Korean brothers and sisters. Two American stories reported globally in the press weigh on our conversations, though—stories of murderous hatred resulting in 13 dead because they were African American or because they were Jewish. Devastating. Horrific.

Like many, I feel two intense but conflicting responses to the murders in Louisville last Thursday and the massacre at the Tree of Life synagogue on Saturday: we must speak, but how can words matter? We must act, but what can be done? Paralysis is tempting but it is also indulgent.

Words and actions of hatred and violence—religious, racial, political, or all three—devour their victims and their perpetrators, even as they violate the whole society they often claim to serve. We are living in a season when words are emptier yet more incendiary than ever. How can both be true? And what is our obligation within this crippling reality of emptiness and power?

Anti-semitism and racism are deep in the soil of America. We are living in a season where those evils are freshly bearing their “strange fruit” in strutting confidence, empowered by fellow citizens, pundits, and politicians at every level. This creates a cultural milieu that panders to our worst selves at the expense of a falsely named “other.”

Thus we foster our own demise, even as we crave demonstrations of what is true, just, and compassionate. Our nation needs to see, hear, feel, and taste justice and goodness incarnate—not be offered impotent platitudes. Empty words have no such incarnation and do no real work, except, ironically, to wreak destruction by doing nothing.

At the very same time that words appear to have lost their power to inspire justice and compassion, their incendiary powers to inflame vulnerability, woundedness, anger, rage, helplessness, prejudice, and hatred seem more potent than ever. Absent wisdom in our speech, passionate but empty words can spark explosions of damning action, fueled by the sin that lies dormant in all of us.

I saw a meme repeated several times on social media that includes a quote from the Pirkei Avot (i.e., ethics from Jewish elders in response to the Torah). It mirrors this strange dichotomy of impotence and power: “You are not obligated to complete the work, but neither are you free to abandon it (2:21).” We should not give up either speech or action, but we should cultivate humble listening first. That is one way to do both in love and to let the power of the truth do its own disruptive work.

It is worth noting that Jesus did not spurn incendiary words simply because they were dangerous. The truth is often inflammatory, and Jesus never shied from speaking truth to power. In Luke 4, Jesus stood in the synagogue and, through the reading of Isaiah 61 and his personal testimony, spoke words that unsettled even the righteous, making some angry enough to seek his death. So, some words are inflammatory because they are filled with truth; however, others are empty of all but flame. These words are kindled by self-aggrandizing passions, igniting bonfires that bring neither heat nor illumination.

From the midst of our sorrow and indignation over religious, racial, and political warfare and hatred, we who are followers of Jesus are obligated to stand against our nation’s careening acquiescence to words and acts that are evil and unjust. Concurrently, we must remember that self-delusion happens in a thousand single steps—that God’s people careen as easily as anyone else. Slave traders prayed for safety through the middle passage. The Lutheran church was too often silent before the Führer. Pastors have draped themselves in KKK robes, hats, and masks. This to our shame but also for our instruction.

Let’s make it our aim to lead with informed action and courageous speech while resisting becoming flame-throwers in the name of peace or justice. As people of conscience and disciples of Jesus, let us declare again that we steadfastly oppose all anti-semitism, systemic and personal racism, hatred against immigrants and strangers. Let us order our actions toward redressing those realities in and around us vigorously, by all godly means, including voting and advocating, protesting and organizing, praying and serving, forgiving and accepting forgiveness.

In the meantime, let us not forget the anguish of Pittsburgh and Louisville this week. When I first heard the names and saw the ages of those killed, as a pastor I readily imagined a similar list naming some of my own faithful beloveds: Ruth, Frank, George, Clarence, Hilda, and Bea. It is painful to think of the death-bearing nightmare that fractured the richly ordinary moments of these whose names we speak and honor here:

With gratitude that Christ alone is the “Word made flesh,” and with conviction: We cannot finish the work, but neither will we abandon it.