Charlotte Robinson's first Sunday in Almond Springs felt like the first time that she met her in-laws, after she had already eloped with Len during college. Once again, the marriage was final even before she had met the family. She wished Len could be there with her on this first Sunday of July, her initial Sunday in the pulpit at the First Church of Almond Springs. But Len and the teenagers would not arrive for another month.

Charlotte understood her symbolic importance as she stood before the congregation. She reminded herself that her meticulously-sculpted sermon was not nearly as important to this people as the wondrous sense of hope that her mere presence conveyed. She wanted her words to give voice to that hope and to help the Almond Springs church to turn itself and its community in a new direction. 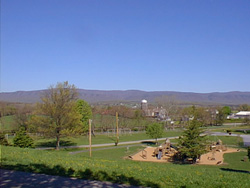 Charlotte's hiring had surprised many in the congregation. They had been vaguely aware that the Church Board had been hoping to locate a full-time minister. But the board had talked wistfully about doing that for years. But as soon as the announcement was made, everyone knew why it had come in this moment, at this time. It was the first effect of the new highway, folks said. And they were right.

The new highway, also called the Pass-through, was going to change the town. Almond Springs, California, was a rural village in a mountain valley above the city of Fresno. Until recently, the drive to Fresno meant a grueling hour navigating mountain roads. The "Pass-through" was the nickname locals gave to newly-opened Route 17, a state highway that shortened the distance to 23 miles by going straight through the hills. Civic leaders knew that the Pass-through meant that Almond Springs would remain isolated no longer.

Such confidence had inspired three men to interview Charlotte Robinson on a bright May morning. Louis Walsh, Dr. Hamilton Davis and Vic Vargo arrived at a restaurant near Charlotte's Silicon Valley parish brimming with hope. She thought of them as the Three Wise Men, emissaries from the East bearing symbolic gifts along with promises about the future.

She knew it was time to leave her position as a part-time associate minister. So she listened to their tale. Dr. Davis (the stately physician) told how over the last twenty years the peaceful little town had "become hollow," as he put it. Stores closed and kids who left never returned. But Louis Walsh (the frenetic mayor) could not leave that bad news laying too long on the table. He interrupted Dr. Davis to tell how their town had re-captured a sense of hope. He likened the new highway to the hand of God. "It's as if God picked up our town and moved it forty miles closer to Fresno. And that makes prosperity possible. Our residents will have jobs. Our schools will have children. Our businesses will have customers. And our church, our church will now have a pastor." That's when Vic Vargo (a local businessman) explained that the three of them had fronted the money so that the congregation could hire a pastor. By the end of the interview, they had (informally) offered the position to Charlotte.

And, six weeks later, she stood before the congregation, ready to speak.