Charlotte Robinson was surprised to hear splashing water and the hint of music as she returned from her hike. On Thursdays, Rev. Robinson drove up from her congregation -- the First Church of Almond Springs, California -- to a cabin on Little Lake. Owned by Stuart and Brandi Dolman, the cabin provided a convenient place to pray, reflect and prepare her sermons. She began each visit with a short hike to a small cliff, where she literally prayed over the valley that God had entrusted to her care. There was a hint of fall in the air today and the first leaves were turning. Why would anyone be in the water on a day like today?

Nearing the cabin she saw Brandi's red convertible and could hear the Dixie Chicks or Shania Twain playing on a radio (Charlotte still could not tell the difference). Out in the water, Brandi appeared to be swimming laps between two large boulders. Charlotte was not sure what to do next. She did not know Brandi very well and had never seen her at church. Brandi's husband, Stuart, was the church treasurer and it had been his offer that brought Charlotte to the cabin on Thursdays.

Brandi had something of a reputation around Almond Springs, Charlotte knew. But she also knew enough not to trust small town gossip. Charlotte had heard, among other things, that Brandi was a former cheerleader who once modeled in San Francisco. Charlotte understood how a flashy dresser who drove a convertible could get an exagerated reputation. But she had suppressed a smile when her daughter had told her that Brandi was a nudist. "Well," Charlotte thought, "I have a feeling I am going to get to know Brandi soon enough." 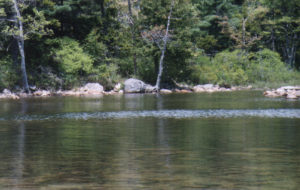 Charlotte sat at the picnic table near the lake and began to write her sermon ideas, blocking out as best she could the noise around her. "Brandi will approach when she is ready," Charlotte surmised. Soon Brandi was swimming toward shore. She stopped at a place where she could stand with only her head exposed to the wind and called to Charlotte. "Hello there. I forgot that you come up here on Thursdays. I hope I am not bothering you." Charlotte responded, "Well, it is your cabin, Brandi, I hope I am not bothering you. Perhaps you'd like to have some lunch with me." Brandi smiled mischeviously, "That would be fine. But I'd prefer to eat out of doors if you don't mind." "No problem." "Well," Brandi said, "Let me get out and lay in the sun until my hair dries and then we can eat." "OK," Charlotte said as Brandi began to step out of the water. That's when Charlotte realized that Brandi was naked.

"I'm being tested," Charlotte thought immediately. She looked back down at her journal and called out, "Let me know when you are ready for lunch." A quarter-hour later, Brandi got up and put on a beach wrap and walked into the cabin without a word. She emerged a few minutes later wearing a turtleneck and pants. "She must have blow-dried her hair," Charlotte thought as Brandi approached the table. They had a nice lunch that day, egg-salad sandwiches and Michelob (another test, Charlotte thought).

Brandi returned sporadically on Thursdays throughout the fall, interupting Charlotte's solitude. Brandi still had not been to church, but something was clearly happening. Brandi told Charlotte of the Dolman's past marital difficulties -- specifically Brandi's affairs with other men. That was why they had moved to Almond Springs eight years ago, Brandi said. "It was Stuart's attempt to exile me to some backwater." At first her tone seemed to Charlotte meant to shock. But then the pastor detected real remorse in Brandi. Finally Brandi told her about a moment two years ago.

"I went into Fresno to buy Stuart a birthday present. While I was in town, this gorgeous young construction worker started hitting on me. And then I realized that I felt nothing as he talked to me. There was no temptation, no thrill. I was actually annoyed. That's when I decided to replace the ring I had, ahh, umm, lost after my first dalliance."

Over time, Charlotte learned that the reason Brandi had first visited Charlotte at the lake was that Stuart seemed to trust Charlotte. There was embedded in the statement both a compliment and an accusation. But as Brandi got to know Charlotte, she found herself (in her words) "sucked into this church thing." One day she came with Stuart to church. And then returned the next week. At first, Brandi would not admit that something was happening. "I just want to see if all that sermon-writing at the lake is paying off." But eventually she could not hide her growing spiritual sensitivity.

Brandi still tried to shock Charlotte sometimes with graphic descriptions of some past sexual liason. But she was just as likely to ask a probing question that showed she had been mulling over Charlotte's sermon for days. Charlotte knew she could not devote so much of her dedicated sermon time to one person. But she found herself drawn to Brandi. It was as if Brandi was (at age 50) coming to understand lessons that most people learn thirty years earlier.